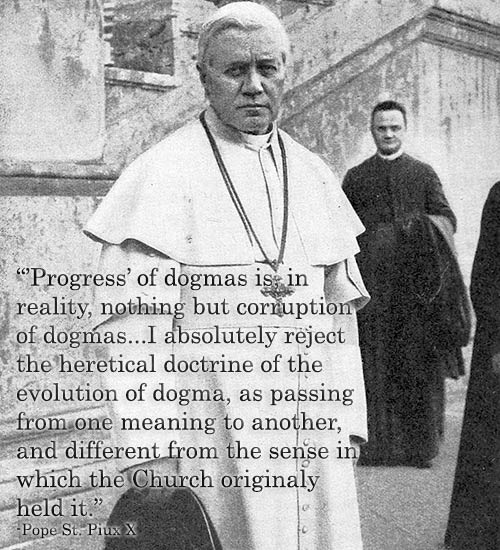 Dedicated to the Great Mother of God, Mary Most Holy 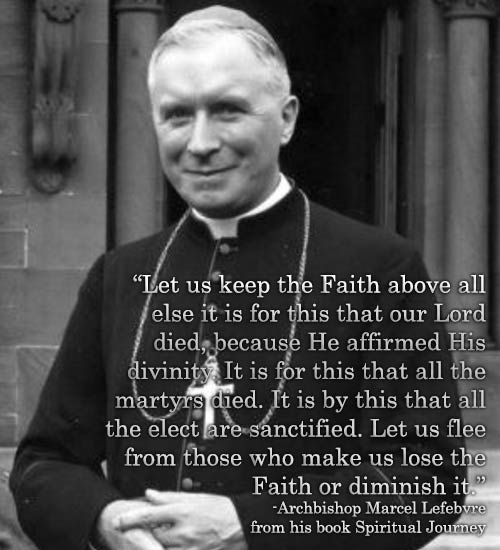 We cleave, with all our heart and with all our soul, to Catholic Rome, the guardian of the Catholic Faith and of the traditions necessary for the maintenance of that Faith and to eternal Rome, mistress of wisdom and truth.

On the other hand we refuse and have always refused to follow the Rome of the neo-Protestant trend clearly manifested throughout Vatican Council II and, later, in all the reforms born of it.

All these reforms have contributed and are still contributing to the destruction of the Church, the ruin of the Priesthood, the abolishing of the Sacrifice of the Mass and of the Sacraments, the disappearance of the religious life, to naturalist and Teilhardian teaching in the universities, seminaries and catechetics, a teaching born of liberalism and Protestantism and often condemned by the solemn magisterium of the Church.

No authority, not even the highest in the hierarchy, can force us to abandon or diminish our Catholic Faith, clearly laid down and professed by the magisterium of the Church for nineteen hundred years. “But,” said St. Paul, “though we or an angel from heaven preach any other gospel unto you than that which we have preached unto you, let him be accursed” (Galatians I. 8).

Is not that what the Holy Father is telling us again today? And if there appears to be a certain contradiction between his words and his deeds as in the acts of the dicasteries, we abide by what has always been taught and turn a deaf ear to the Church’s destructive innovations.

It is not possible profoundly to modify the “lex orandi” without modifying the “lex credendi”. To the new Mass there corresponds a new catechism, a new priesthood, new seminaries, new universities, the charismatic and Pentecostal Church–all opposed to orthodoxy and to the age-old magisterium of the Church.

Born of liberalism and modernism, this Reform is poisoned through and through. It begins in heresy and ends in heresy even if not all its acts are formally heretical. Hence it is impossible for any informed and loyal Catholic to embrace this Reform or submit himself to it in any way whatsoever.

The only way of salvation for the faithful and the doctrine of the Church is a categorical refusal to accept the Reform.

It is for this cause that with no rebellion, no bitterness, no resentment, we carry on our work of training priests under the star of the timeless magisterium, convinced that we can render no greater service to the Holy Catholic Church, the Sovereign Pontiff and future generations.

It is for this cause that we hold firmly by all that has been believed and practiced in the Faith, in morals, in worship, in the teaching of the catechism, the molding of a priest and the institution of the Church, that eternal Church codified in her books before the modernist influence of the Council made itself felt, awaiting the time when the true light of Tradition shall scatter the darkness clouding the skies of eternal Rome.

In so doing, by the grace of God, the help of the Virgin Mary, of St. Joseph and St. Pius X, we are assured of remaining faithful to the Holy Roman and Catholic Church, to all the successors of Peter, and of remaining “fideles dispensatores mysteriorum Domini Nostri Jesu Christi in Spiritu Sancto.” Amen.

Join us in the battle for the reign of Christ as King, the preservation and promulgation of the Holy Roman Catholic Faith through the Holy Sacrifice of the Mass in the Tridentine Latin Rite of all time, offered by holy priests sound in the true doctrine and firmly rejecting and refusing all modernism, as passed down to them through the great Archbishop Marcel Lefebvre. The Sorrowful Heart of Mary Apostolate, SSPX- MarianCorps is currently serving mission chapels throughout the United States but also including Canada, Mexico, Great Britain, Australia, and New Zealand (sadly, contingent to travel restrictions as of 2020). Please view our Mission Chapels page for details of these locations.  We are honored to house the sermons of Fr. David Hewko and Fr. Hugo Ruiz every week, many times daily, as soon as they are made available to us. Please pray these works reach souls through the hands of Our Blessed Mother for their salvation and for the honor and glory of God. Let us stay united in the one, holy, catholic, and apostolic Church, being found always close to Our Sorrowful Mother at the foot of the Cross, for it is here we will find the throne of Divine Mercy.